Code generation is a common tool in software. Usually it sits behind the scenes, just a layer of automation translating from one programming language to another. But sometimes it becomes useful to build your own code generator. In a project at work, we’ve implemented a code generator based off a DSL (domain specific language) that generates an implementation of our domain contract. There’s a lot of meaty terms in that last sentence, let’s spend some time and break them down.

First, I said that code generation is common, but behind the scenes. That’s because most compilers have some form of code generation happening in them. So for example, compiling Typescript for a Web app, or compiling Swift for an iOS app.

Let’s talk a little more about compilers. A compiler’s job is to take source code that humans can read and produce output that a computer can run. This is broken up into parts:

Parsing the source code is all about understanding text and turning it into a format a computer can do stuff with.

Stuff could be interesting things, like in Typescript, adding static type checking to vanilla Javascript. This usually involves manipulating an abstract syntax tree. For example, you could enforce rules in the tree and make sure everything is valid.

Generate output is the code generation part. The tree needs to turn back into something that the computer can run. For Typescript this is generating Javascript, for Swift, this is producing machine code.

Given the above syntax, parsing turns it into a syntax tree: 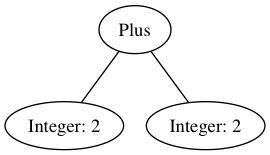 Then for stuff maybe we want to enforce that a “Plus” always has “integers” connected to it. In this case, our tree looks good.

For generate output, we need a rule for what to do with a “Plus”. I’m making up this rule:

So we apply that rule to our tree and get:

Which is approximately what machine language looks like 🙂 I linked to NAND to Tetris which my friend Devin Mork showed me. It reminds me of my computer architecture course in college.

A domain specific language is making your own programming language. This lets you (1) create a language that is more meaningful and specific, and (2) produce generated code that does something useful.

One example is defining an API between two microservices. You could exchange URL’s back and forth between developers:

But then you’d also need to agree on an API body format (maybe JSON), whether things are a GET or a POST, and a myriad of other details.

What if instead you could use a DSL that let you define the following:

This defines something meaningful to the domain (we have an api with a command and a query), but hides the implementation.

This is a partial example, you’d need a bridge between the generated code and hand-written code. For example, maybe “something” is a call to an interface that a developer will implement by hand.

This is not a new idea, Martin Fowler wrote a book “Domain Specific Languages.” For web APIs see also grpc and api blueprint. If those meet your needs, I would use those instead of making the investment in building your own DSL and code generator.

See my github, my portfolio, or my LinkedIn profile.